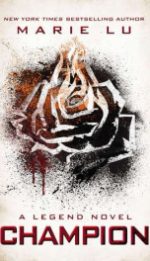 Marie Lu is a brilliant author. She writes about characters that are complex and relatable, even if they’re not always likable. Her books are full of action and adventure, but they also have a lot of depth to them—you’ll definitely get attached to some of the characters in these books!

Legend is the first book in the Legend series, and it’s set in a future where a plague has killed off most of humanity. Day, who was once an ordinary teenager, lives on the streets as a criminal and vigilante with his friends. However, when he rescues an injured girl named Fire from being attacked by gang members at nightfall (the time when people go out), they become fast friends despite their differences—and one day she tells him about her father’s terrible secret: He has been keeping track of all citizens who are still alive by recording their DNA sequences into physical objects called “legends.”

Day realizes that these legends could be used as weapons if someone wanted them badly enough; so he decides to steal some for himself! This leads him into trouble not only with police officers but also those who want them back too—in particular his best friend Simon and another girl named Ana who works for the government agency that monitors these things called The Bureau (which doesn’t sound very appealing).

Prodigy is the first book in the Legend series by Marie Lu and it was published in July of 2013. It’s about a teen named June who lives in a dystopian future where the government is run by corporations, so everyone must register and go through DNA tests every fifteen years or they will be sent to work camps. The main character, June, has special powers that allow her to manipulate electronics with her mind. She also has no family members because they were all killed off when she was younger; this means that if you want anything from society today—like food or shelter—you have to work for it yourself! You can read more about this book here: http://www.goodreads…

The overall plot line focuses on how well someone can survive without being able to rely on other people for help (or even basic needs). This includes everything from finding food sources (which aren’t always easy) all the way down into figuring out what kind of relationships are best suited for your personal needs at any given time within said community.”

Champion is the third book in the Legend series. It’s set in the same world as Prodigy and Legend, which means that you can read it if you have those two books on your TBR list!

The main character is a teenage girl who is a member of the Republic’s most elite military force, called The Black ops. Her name is Marie Lu and she has to deal with her past as well as her future.

In Pariah, Lu introduces readers to the third book in her Legend series. This dystopian future takes place in a world where people are divided into classes based on their abilities and each class is ruled by an elite group of people called the Selects. Day is a criminal and rebel who fights against this government with his team of rebels known as The Bloodline.

This fast-paced action packed novel has you hooked from beginning to end as you follow Day on his quest to try and save everyone he loves from being killed or imprisoned by The Selects.

Marie Lu is a fantastic author, and I encourage you to try out her books!

You should try out Marie Lu’s books! I have read almost all of them, and they’re fantastic. The books are well written, fun to read and exciting. They also have a good plot that keeps you engaged in what’s happening throughout the story.

I hope you enjoy them as much as I do!

I hope you have enjoyed this write up on the best books by Marie Lu. I have read each and every one of them, and I can attest to their high quality. If you’re interested in reading her work yourself, please let me know in the comments!